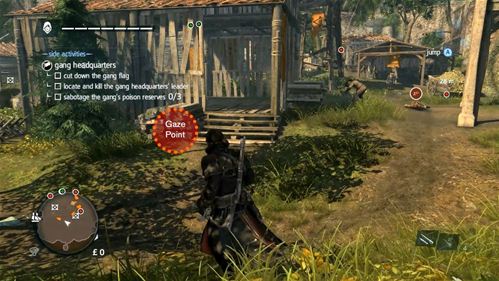 STOCKHOLM & PARIS – February 5, 2015 – Tobii Tech, the global leader in eye tracking, in partnership with Ubisoft®, the leading creator, publisher and distributor of games, announced today that Assassin’s Creed® Rogue, the new installment in the multimillion dollar Assassin’s Creed franchise, will feature integrated eye-tracking input in its PC version. This makes it the world’s first AAA game to incorporate eye tracking as a component of gameplay. Packaged with SteelSeries Sentry, the world’s first gaming eye tracker, Assassin’s Creed® Rogue showcases the next evolution of human interfaces in gaming.

“Eye tracking is such a natural way to interact with a game and creates tons of potential opportunities for gameplay immersion,” said Corneliu Vasiliu, Producer at Ubisoft® Kiev. “We are one of the first to integrate this technology in a video game, and the first to implement eye tracking as a gameplay input in a game of that scale – providing Assassin’s Creed® Rogue gamers with an entirely new, complementary input to the keyboard and mouse. We recognized the power of eye tracking early and were quick to work with Tobii to create a completely new way to experience a game – We are really proud of the result with Assassin’s Creed® Rogue.”

“This is only the beginning of eye-tracking in gaming. It is an important step in Tobii’s long term vision to create a strong ecosystem of games and apps that use eye tracking to create even more immersive experiences”, said Oscar Werner, President of Tobii Tech, a division of Tobii.

There is currently no direct revenue to Tobii as a result of this specific integration, but there is a strong indirect business value for Tobii as every new application such as this AAA game integration will increase the usability of the company’s eye-tracking platforms, thereby driving the sales long term.

How it works – Players get an “Infinite Screen”
With traditional keyboard and mouse inputs intact, players using the Sentry with Assassin’s Creed® Rogue will experience true gaming immersion when their gaze and that of Shay Patrick Cormac, the game’s protagonist, are one and the same. For example, as the player looks to the left of screen, Shay Patrick Cormac will look to the left of his environment and the scene camera will pan to accommodate the exploration of this new visual territory creating an “Infinite Screen” experience. No longer will PC players be restricted to the size of their screen to orient Shay Patrick Cormac’s field of view and further explore the environment; the game auto-pans intuitively and in harmony with the player. Players can revert to their traditional mouse control by simply grabbing it. Assassin’s Creed® Rogue will also pause and resume automatically if the player looks away from the screen and back again, preventing disruptions in gameplay.

“Assassin’s Creed® Rogue with eye tracking aligns the gamer’s and a character’s senses so naturally, creating a truly immersive gaming experience. We’ve added an intuitive and natural modality without inhibiting the player’s ability, taking anything away or having to make a trade-off that lessens Assassin’s Creed® Rogue’s enjoyment for the gamer,” said Werner.

Enter the Experience – Available with the SteelSeries Sentry
Starting today, gamers who purchase the SteelSeries Sentry, a 2015 International CES Innovations Honoree, will also be given the full version of Assassin’s Creed® Rogue for PC for free when it ships in March. The offer is limited to the first 5,000 units. Those that want to be part of the next evolution in gaming and secure their free copy of Assassin’s Creed® Rogue can do so on the SteelSeries or EMEA Uplay shop, the Ubisoft® official store (excluding Russia, Australia and New Zealand).

“It’s important to Ubisoft® to always seek out the best input mechanisms commercially available on the market to provide the maximum creative flexibility to our developers,” continued Corneliu Vasiliu.

“Infinite Screen” is only one way to increase immersion in games using eye tracking. Other possibilities for eye tracking in gaming include:

Tobii is currently working with numerous developers, from independent to globally-recognized studios, to enhance their games with eye tracking.

About Tobii Tech
Tobii Tech is a division of Tobii, the global leader in eye tracking that focuses on taking Tobii’s leading eye-tracking technology to new high-volume markets including computers, gaming devices, vehicles and medical devices. The division’s customers integrate Tobii’s eye-tracking technology into various devices and applications and take this to market under their brand and channel. The division is also investing in evolving its leading technology to meet the needs of larger-volume markets in terms of cost, low power consumption, form factor and performance. http://www.tobii.com/

About Ubisoft
Ubisoft is a leading creator, publisher and distributor of interactive entertainment and services, with a rich portfolio of world-renowned brands, including Assassin’s Creed, Just Dance, Tom Clancy’s video game series, Rayman, Far Cry and Watch Dogs. The teams throughout Ubisoft’s worldwide network of studios and business offices are committed to delivering original and memorable gaming experiences across all popular platforms, including consoles, mobile phones, tablets and PCs. For the 2013-14 fiscal year Ubisoft generated sales of €1,007 million. To learn more, please visit http://www.ubisoftgroup.com/.